They spent the rest of the afternoon discussing the new information, and then sleeping for a few hours, before going out to eat an early dinner. When they returned to the motel room, it was late afternoon.

"I'm really worried, Jack," Daniel said. "The moon will be full in a few hours... I'm positive I can feel myself changing. I'm feeling... irritated... as if I feel like disagreeing with you guys all the time. As soon as I get agitated, I start to change. We've seen that more than once! I mean..."

"Shh... relax, Daniel," O'Neill insisted. "If you change to a werewolf when you get agitated, then what about you stop getting agitated?"

"Don't you understand? The moon is causing me to change! I can barely control myself!"

"Daniel! You heard what Carter and Lantash said! It's just a virus! It's not something supernatural, so I'm sure the moon has no effect on it! It's all your imagination! You're working yourself up over this, causing that damn transformation to happen!"

Daniel took a deep breath. "Maybe. I still don't think it's safe for me to be in here with the rest of you."

Daniel grumbled something, then went over and sat on the couch. "Fine. I'll try to sleep, but I don't think I can. It feels like I'm on edge all the time!"

The others had all fallen asleep, with the exception of Teal'c. Suddenly, they were awoken by the sound of a zat'nik'tel firing, and a loud growl.

"What the Hell is going on?" O'Neill exclaimed.

Teal'c was holding down a thrashing and growling Daniel - who had glowing yellow eyes and large teeth, as well as pointed ears and various facial changes. "You must assist me!" Teal'c panted. "I cannot hold him, and the zat'nik'tel shot did not transform him back for long, as it did the other times!"

The others ran to assist Teal'c, taking care not to be scratched by Daniel's now long claws.

"Perhaps if we shoot him again, he will change back to human?" Lantash suggested. "He did, for a brief moment, just like the werewolves that attacked us in the forest. Also, on them, one shot did little else to them, and two did not kill them."

"No!" O'Neill ordered. "We're not taking that chance! What if it kills him? It's only been minutes since Teal'c shot him!"

"We'll have to tie him up..." Jacob searched the room, while the others continued keeping Daniel down. "I'll just check outside - I'll be back in a moment."

"Hurry up!" O'Neill shouted after him. Daniel was so strong that it was hard for them to hold him down, especially since they had to avoid his teeth and claws - and avoid hurting him as well.

It was only a few minutes later when Jacob returned, carrying a long length of rope. "I found this in the garage - and no, no one saw me, so we'll be fine."

Tying up Daniel was no easy feat in his current condition, but they finally succeeded. O'Neill unceremoniously showed a sock in his mouth, silencing his growls.

"Okay, that was... not so good," Sam said, giving Daniel a concerned look. "Do you think he'll stay this way, or will he return to human form?"

"How should I know?" O'Neill grumbled. "I certainly hope he changes back to human, because it's not going to be easy hiding him like that!"

"Well, it would seem he is indeed reacting to the full moon, as he feared. If that part is true, then perhaps the other part is as well? I remember he explained to us that in many of the myths, werewolves only changed when the moon was full. Would that not imply he returns to human tomorrow?" Lantash wondered.

"I sure hope so!" O'Neill said, throwing an unhappy look at the growling and twisting Daniel.

They took turns watching Daniel all night, making sure there were never less than two people guarding him at any time. As tired as they were, those not on guard duty managed to sleep a little, though not as much as they had hoped for.

Sam made a sleepy sound, and stretched. Doing so, she rubbed against the person lying beside her, his back snuggled against her. She opened her eyes, and looked confused at him. "Martouf?"

He woke as well, and half-turned to look at her. "Samantha. I... seem to have moved closer to you in my sleep. I apologize."

O'Neill grinned. "But you looked so cute, guys! Spooning and all..."

Sam rolled her eyes. "Thanks, sir. I think."

Martouf and Sam both sat up, giving each other slightly embarrassed - and goofy, happy - looks.

"Well, as you can see, Daniel is himself again." O'Neill smiled, too relieved by that fact to feel like teasing his second in command any further.

"Hi, guys... sorry about my behaviour tonight..." Daniel gave them a sheepish look.

"How much do you remember?" Sam asked, curious.

Daniel shook his head. "Not very much. Enough to concern me... and Jack and the others have been filling me in."

"She's right, you know. It's Nirrti's fault - and maybe Ba'al's." O'Neill sighed. "There's something else - Daniel got a scratch tonight, when we were fighting him, and now it's gone. Like completely."

"Interesting... so you've got heightened healing?" Sam looked fascinated. "Can you control it?"

"How should I know?" Daniel grumbled. "I don't think I can. Pretty sure I can't actually."

"Well, we'd better get going soon. You made quite a lot of noise tonight, Daniel, and people looked at me strangely when I checked outside a short while ago," O'Neill said. "Take your showers, folks, no way of knowing when we'll get that chance next!"

It was nearing evening, when SG-1, Martouf/Lantash, and Jacob/Selmak approached the next place that was more than just a village.

They were walking through the lower parts of some hills they had crossed earlier, passing through the outskirts of what seemed to be a fairly large forest.

"We've walked quite a bit since then, so maybe another 5-6 clicks, I think," Jacob offered.

"Let's pick up our pace, then. I don't particularly feel like meeting another group of those werewolves." O'Neill looked around as if he suspected werewolves to be hiding behind every tree.

"That was a couple hundred miles back. We drove much of that in a car, so I doubt they'd be able to catch up with us quickly. Of course, that's assuming they even went in the same direction," Jacob said.

"I see you're unfamiliar with SG-1's luck. If things turn out like they usually do, then those werewolves are probably already here, and if not, they soon will be. Don't forget they may be working for Ba'al," O'Neill reminded him.

"Yes, may be working for Ba'al. We don't know that for certain... but I agree. It's better to be safe than sorry," Jacob admitted.

Walking a little faster, they continued on through the forest. It was perhaps 15 minutes later, when the sun had set and the shadows were getting deep, that they were surprised by a man suddenly standing on the track in front of them.

"My name is Derek, and I believe we should talk."

"Why? About what?" Jacob demanded.

"What the military wants with a werewolf, among other things."

"Werewolves?" O'Neill scoffed. "What are you talking about?"

"That one..." Derek pointed towards Daniel. "I sincerely doubt you're unaware he's a werewolf. The moon was full yesterday."

"All right," O'Neill said, deciding on a different track. "Get your facts right then. We're US Air Force, but we're not involved in creating werewolves, if that's what you're implying."

"I was doing no such thing!" Derek sounded insulted.

"Also, I'm curious how you know Daniel is a werewolf? Have you been following us?" Martouf wondered.

Derek stared at Martouf for several moments, without answering.

"Marty's question is valid. So, have you been following us?" O'Neill demanded.

"He can smell it," Daniel suddenly said. "That I'm a werewolf."

"I have not been following you - and Daniel is correct." Derek looked at Martouf again, his gaze turning unfriendly. "For a moment, I thought you were someone else. You look remarkably like him, but you are clearly younger. Are you coming to assist your family in hunting us down? Does Daniel know what your family do?"

"My family?" Martouf looked puzzled. "I assure you, I have no family on the entire planet."

Derek shook his head. "I'm not sure I believe you, but I don't care about your reasons for lying." He turned towards Daniel. "Daniel... you need to come with me. You are not safe around here... and not just because of the hunters."

"What?" O'Neill scoffed. "Of course he's safe! He's with us!" He gave Derek a close look. "You say you can smell him. Does that mean you're one of them?"

Derek allowed his eyes to glow red, and he opened his mouth, baring his large fangs. He grinned, changing back to human form. "As you can see..."

The others immediately took several steps back, and reached for their weapons.

"Whoa..." O'Neill said. "You must belong to the group that attacked us. Your kind did this to Daniel!"

"I assure you, I was not involved. There are more than one group of 'my kind', and we do not all get along. To put it mildly. One more reason your Daniel should stay here. There are things he needs to know. Things he needs to learn, in order to control his abilities, and learn to use them. To protect himself."

"Use them? We're going to cure him! He doesn't need to learn anything about his abilities!" Sam exclaimed.

"Really? What happened last night? During the full moon?" Derek asked, in a mocking tone. "What makes you think you are safe with him?"

"How dare you imply I would harm my friends!" Daniel suddenly shouted, his eyes turning yellow and his features starting to change.

Derek scoffed. "See? As soon as he gets a little excited..." He suddenly looked away from them, past them. "Someone is coming. Hunters, I believe - not sure which group. I would suggest you leave. Immediately."

"Werewolf hunters. There are currently two groups in the area. One hates the guts of all werewolves, the other has become more... mellow. Some of them, at least. In any case, neither of them are going to like a new, unknown werewolf. Meaning they won't like you, Daniel. You should come with me."

"Never!" Daniel yelled, still too agitated to control himself. "Leave, if you're afraid!"

"Listen, Daniel... relax, okay? You can control that." O'Neill tried reassuring him.

"No, he can't. He needs to learn it. I can help!" Derek glared angrily past them, seeing people approaching. "Now or never, Daniel!" He turned to leave.

Daniel growled at him, and Derek shook his head before hurrying away.

"Derek!" A young woman's voice shouted. In the moonlight, they could see that she was holding what looked like a cross bow.

Daniel growled and ran in her direction.

Before he could say anything further - and before Daniel could get much closer to the woman - she fired something towards them, which hit between them and Daniel. It exploded just as she jumped behind a large tree. Sam, Daniel, O'Neill, Teal'c, Martouf/Lantash, and Jacob/Selmak all fell to the ground, unconscious. 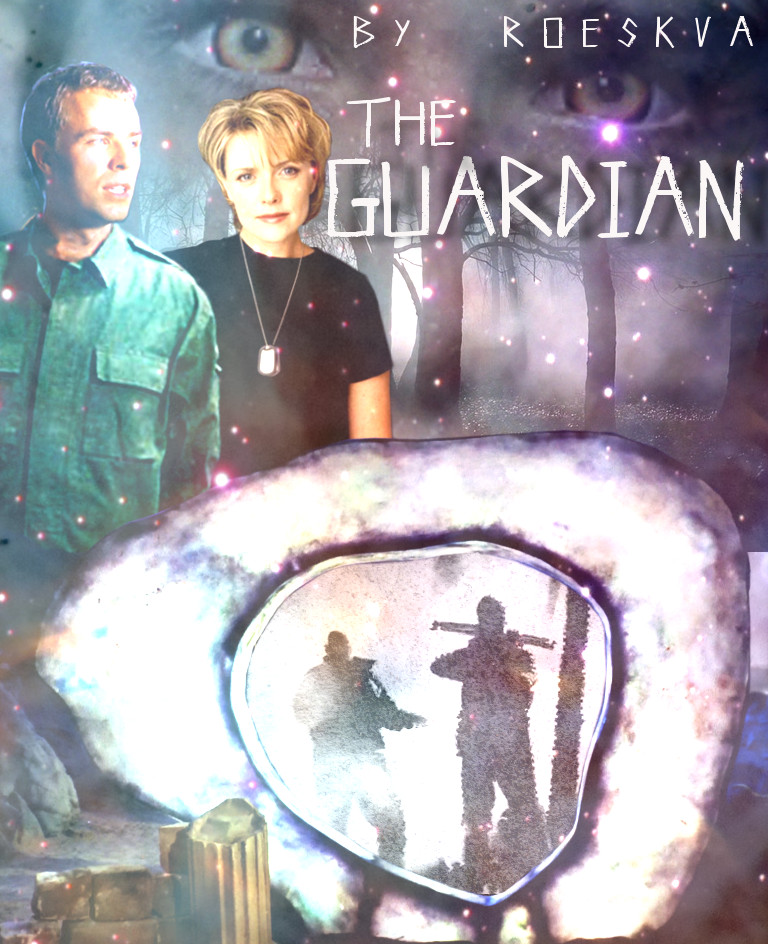