TITLE: Healing Reviews
AUTHOR: Roeskva
CATEGORY: Hurt/comfort/romance
DISCLAIMER: All publicly recognisable characters and places are the property of MGM, World Gekko Corp and Double Secret Productions. This piece of fan fiction was created for entertainment only and not monetary purposes and no infringement on copyrights or trademarks was intended. Any similarity to real persons, living or dead, is coincidental and not intended by the author.
PAIRING: Malek/Janet
SUMMARY: Written for the Spring 2010 Stargate Second Lives at phoenix-gate. Prompt: Malek/Janet. Assume they met after "Cure" and fell in love. Malek is grieving after Egeria's death. Janet wants to comfort him.
RATING: PG
CHARACTERS: Malek, Janet
STATUS: Complete
SPOILERS: Cure 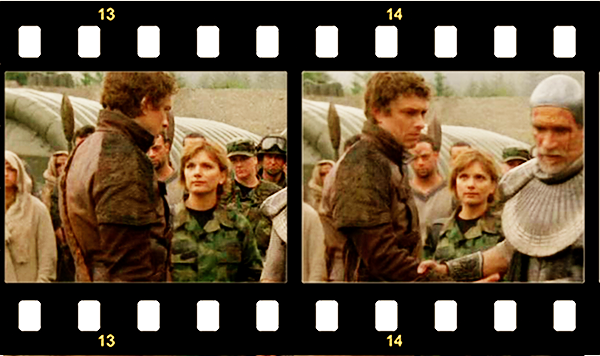 Malek turned to see Janet standing in the doorway. He nodded slowly.

"Thank you." He turned back to his work.

"You don't have to pretend you're unaffected. I do understand what it means to you." Janet walked over to stand beside him.

"Do you? Really? The Tok'ra are a dying race! Egeria was our last hope!" Malek said, suddenly no longer able to keep his calm. He stubbornly refused to look her in the eye. He did not want her to see how close he was to crying. He did not want to appear weak to her - he could not handle any pity from her side. Not now.

Janet took a deep breath. She really wished there was something she could say that would make him not look so sad. Her heart was bleeding for him.

"I...perhaps you will find a way." That sounded stupid, she thought.

"How? It is exceedingly unlikely a Goa'uld queen would chose to reform her ways and join our cause!"

"You don't know that!" Janet exclaimed, getting annoyed at his pessimism.

"Yes. No Goa'uld has turn to the Tok'ra in the past few hundred years. The queens are few in number and highly valued among the Goa'uld. To think one of those would become Tok'ra..." He scoffed.

"What about a...I don't know what you would call it...a daughter? Couldn't Egeria have spawned one?" Janet suggested.

"Perhaps. But would she not have told us is she had? No, it is foolish to hope!" Malek exclaimed, angrily.

"I should leave you alone." Janet turned and began to leave, realising there was nothing she could say right now that would help.

Malek suddenly felt torn. His host, Johan was yelling at him in their head. Telling him to go to her.

He remembered the looks Janet had sent him when they had stayed at the beta site. He had only spoken a few words with the Tau'ri doctor then, but she had always been friendly. Both he and Johan had thought they saw something in her eyes. Admiration, attraction...lust, perhaps? They sure felt all of those for her.

Then she had volunteered to work with them here on Pangar - in order to learn from the Tok'ra how to produce the modified tretonin.

The Tok'ra - Malek in particular - held high hopes it could be made completely syntetically and perhaps even be changed to allow Jaffa to no longer carry primtas. That research would later be continued in the Tok'ra tunnels, of course.

Janet considered joining the project for a time, staying in the tunnels, she had told him. Malek and Johan hoped it was - at least partly - because she was interested in them. At least, she had continued to smile those sweet smiles at him from time to time, while they worked. During those days they had taken all their lunch and dinner breaks together.

Malek very much enjoyed working with Janet. She was intelligent and kind. He enjoyed talking with her and spending time with her. Even if he was rapidly approaching the point where he had difficulty thinking clearly when she was standing close by him.

However, despite the fact that Malek and his host were falling head-first in love, the time had been bitter-sweet. Egeria had been growing steadily weaker during those few days since she had taken a host. Yesterday evening she had died, and the grieving Tok'ra had taken her home for their funeral rites.

Everyone had expected the Tok'ra to take some days off after that, but Malek had insisted on returning to the laboratory today.

The work helped him keep his mind off his grief. The Pangarans also needed them to produce enough of the modified tretonin quickly enough that those of their people who had become dependent would not die. The production had not been automated yet and it was a race against time. Besides, Egeria had wanted the Pangarans to be saved. Malek would do anything to fullfill his queens last wish.

However, he suddenly realised he needed Janet to be their with him. Johan was right. They could not let her go.

He turned, just before Janet left the room.

"No. Please, stay. I apologize. I am currently not the most pleasant of companies."

Janet smiled at him, understanding. "I just wish there was something I could do...I don't want you to give up like that." She walked back to him.

"I will not." He assured her, turning towards her. "Not when you are here." The air in the room suddenly seemed lighter and less oppressive to him. He pushed his heavy thoughts aside and smiled at her. "There is something you can do..."

Janet looked at him for a few moments, searching his face for answers. She felt a little unsure, but also hopeful. Did that mean he liked her?

"And what is that?" She asked, a little warily.

"You can kiss me." Malek took her in his arms.

"That I can!" Janet smiled widely. Relieved, she threw her arms around him.

Malek leaned down and they kissed. With his host cheering him on, he felt hope return. He deepened the kiss and felt Janet reciprocate. Yes, life was still worth living.