TITLE: In Disguise Reviews
AUTHOR: Roeskva
CATEGORY: Angst, Hurt/Comfort, Apocafic, AU, episode tag
DISCLAIMER: All publicly recognisable characters and places are the property of MGM, World Gekko Corp and Double Secret Productions. This piece of fan fiction was created for entertainment only and not monetary purposes and no infringement on copyrights or trademarks was intended. Any similarity to real persons, living or dead, is coincidental and not intended by the author.
SUMMARY: What if O'Neill and Teal'c interrupted the ashrak while he was still using the hara'kesh on Jolinar? What would happen if Jolinar survives - but unknown to all of them, the ashrak takes O'Neill as his host?
RATING: PG-13
CHARACTERS: Sam, Daniel, Teal'c, O'Neill, Jolinar, The Ashrak
STATUS: Complete
PAIRING: None
NOTES: Written for Apocalypse Kree! 2013 on Livejournal, for the prompt: 199. The Ashrak|Jack, Sam|Jolinar, the Ashrak took Colonel O'Neill as his host. AU tag to S02xE02: In the Line of Duty 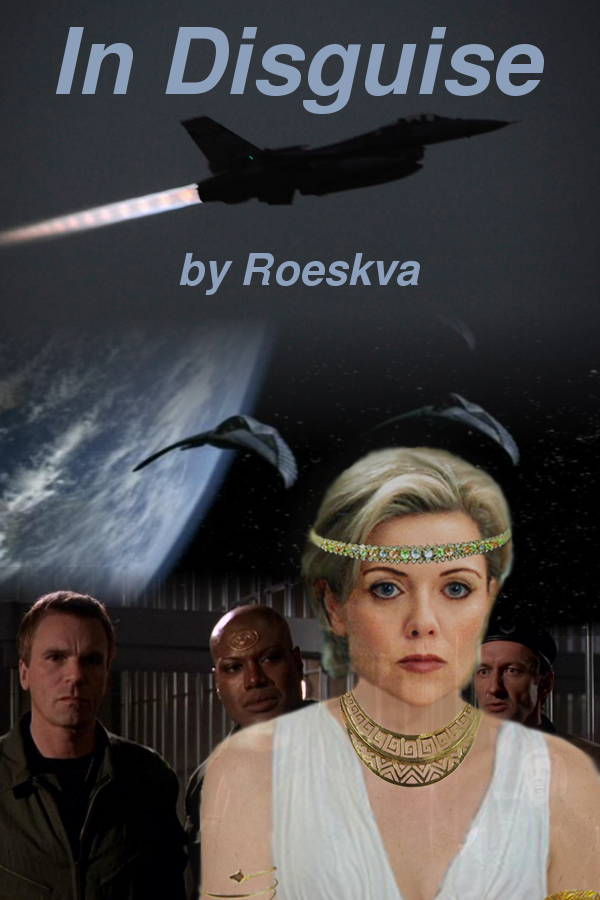 
O'Neill burst into the detention area, followed by Teal'c. He quickly took in the scene; two men down, possibly dead; in the holding cell stood another man, using a weird beam on Carter. It was obviously hurting her. He realized it was the ashrak.

"Hey, stop that!" he yelled, diving to grab the weapon from one of the men on the ground, and cursing the fact that he had not had time to arm himself before going here. "Go get a zat!" he ordered Teal'c, who hurried off to do so.

The ashrak half-turned, flashing his eyes. "Leave, human! While you still can!" He moved, with a speed far higher than O'Neill had expected.

Before O'Neill had time to fire the weapon, the ashrak had made a rolling jump, getting a weapon from the other guard on the floor, and fired it.

It was only a glancing shot, but O'Neill winced. Ignoring the pain, he fired at the ashrak, who reacted to the momentum of the bullet, but did not show any other signs of being affected.

The ashrak hit O'Neill hard over the shoulder, close to the bullet wound, and he went down, the gun clattering to the floor as it fell from his hand.

Immediately, the ashrak turned and fired at Sam/Jolinar, who had half-collapsed on the ground. She cried out, and fell down completely on the floor.

O'Neill managed to roll over and take his gun again, and he emptied the remaining shots into the ashrak.

The ashrak made a gurgling sound and fell, and O'Neill crawled over to take his gun and finish him off.

However, just as he reached for the weapon, the ashrak tore out of his dying host and into the side of O'Neill's neck.

His eyes flashed, briefly, and he had control. Suppressing the pain from the bullet wound for now, he grabbed the weapon lying beside his previous host. He was about to go and finish off Sam and Jolinar, when he sensed Teal'c entering the room.

Deciding on a different tactic, he turned to the Jaffa and spoke, using his host's voice. "Teal'c, Carter's down! She's still alive - we need medics!"

"You are wounded, O'Neill." Teal'c looked at him, then at the bodies on the floor. "The ashrak..."

"Is unconscious. Give me the zat. I'll keep an eye on him. Go call for assistance. Get the medics here!"

Teal'c nodded. "I will do so immediately." He handed O'Neill the weapon and took off in a run.

The ashrak took the hara'kesh from the body of his previous host, and was about to go and finish off Jolinar, when he heard someone in the corridor outside, running towards them.

He would have preferred to make sure Jolinar was indeed dead, but he could not afford to be captured. Tearing through the memories of his new host, he made a quick decision. If Jolinar should live, he would find her and kill her later.

He grabbed a knife from one of the dead soldiers, and carefully placed the point at the entry wound on the side of his neck. He then sliced meticulously, concealing the scar.

Just as he heard someone opening the door, he cried out, and fired at his former host with the zat'nik'tel. Once, twice, three times - and the body was gone.

He allowed the knife to clatter to the ground, and himself to fall to his knees, clutching the wound on his neck. He carefully avoided doing any healing to the injury.

The three soldiers that entered took a quick look at the scene, then ran to their presumed superior officer.

The ashrak again hid the distortion from his voice, looking up at them and contorting his face in pain as he spoke, "The... the ashrak... he stabbed me. I had to shoot..."

The soldiers looked at him in confusion. "What ashrak?"

"The Goa'uld... assassin. I'm afraid it hadn't been long enough since I zatted him. He... was disintegrated."

"Understood, sir." The nearest of the soldiers helped him to sit up. "You shouldn't move too much, sir. You're bleeding badly."

One of the other soldiers, a young man with short red hair, went to check on her. "She's alive, but barely. She's unconscious and bleeding badly from multiple bullet wounds."

The ashrak briefly debated with himself whether he should try to kill the three soldiers and then take care of Jolinar, but he was almost certain there would not be time before Teal'c returned with the medics. Besides, he felt certain he would be able to get to her in some way, and finish her off - if she should survive.

Moments later, medics arrived in the room with a stretcher. Teal'c came running closely behind.

"Check on Carter first!" the ashrak said, keeping in character with his new host. For now.

"Yeah... I guess I got a bit confused, or panicked, or whatever. I know I ended up shooting the ashrak thrice. He went poof. Listen, I'm sorry about it, General, but at least this way we're certain he's gone!" 'O'Neill' said.

Hammond nodded tiredly. "I agree with you, Jack, and no one's blaming you, but there are some who are... unhappy. They'd hope to get a symbiote to examine, and this means it's going to be harder keeping them away from Carter."

"Does that mean Carter will live, sir?"

"I understand. What about the... the parasite?"

"It's alive, but very weak - as far as Doctor Fraiser can tell. It's even more uncertain if it will live. It's unconscious too."

"Not necessarily, O'Neill," Teal'c said. "While I understand your reasons, Jolinar may be all that stands between Captain Carter and death."

"What do you mean, Teal'c?" Daniel wondered.

"Symbiotes have powerful healing abilities, but they need to heal themselves first. If we can keep Captain Carter stable until then, the parasite may be able to save her."

"Would it? Why not just grab another host?" Hammond asked.

"I do not believe Jolinar would be strong enough to do that for a very long time."

"So saving Captain Carter is in Jolinar's best interest." Hammond nodded. "I will relay all you have told me to Doctor Fraiser, Teal'c."

"Of course, that also means Sam's stuck with Jolinar - even if the symbiote was telling the truth about wanting to leave her," Daniel observed.